The Organization of Jews in Bulgaria Shalom has always allocated a very special role to its publishing activity. This activity can be divided into two main sections: the first being the regular publishing of “Evreiski vesti” newspaper and “La Estreya” magazine, and the second being the publishing of books, which inform the Bulgarian reader of the topics of current relevance to the Jewish Community, which other publishing houses would not get interested in. Изданието „Годишник” на the Public Cultural and Educational Organization of Jews in Bulgaria, а по-късно и на Organization of the Jews in Bulgaria Shalom, което е излизало от 1966 до 2004 година е една от емблемите на българското еврейство от една страна, а от друга съхранява ценна информация за общността през годините, която едва ли може да бъде открита, така концентрирана на друго място.

“Evreiski vesti” newspaper is among the oldest periodicals in Bulgaria. The first issue dates back to November 01, 1933. Many Jewish newspapers were printed in Bulgaria at that time, covering the vast spectrum of interests of the Jewish Community in the country. Still printed today, “Evreiski vesti” has a history of practically 80 years, since the only period it stopped being issued was 1941-1944, because of the Law for Protection of the Nation.

During its long history, which the newspaper takes pride in, it underwent various stages of development. It was under the influence of the political and social life in the country, both during the pre-war years, as well as after September 09, 1944. The chief editors of the newspaper have always tried their best to balance between the political situation and the preservation of the Jewish character.

The changes that occurred in Bulgaria after 1989 altered the outlook of “Evreiski vesti”, turning the newspaper into a common Jewish tribune that presented the variety of different points of view within the community. All chief editors and the publisher, represented by the Organization of Jews in Bulgaria “Shalom” consider the newspaper to be a podium of pluralism in the community. The newspaper has an educational mission as well, which is pursued by regularly publishing not only Judaic texts, but also information regarding the history, culture, folklore, and everyday life of Jews in Bulgaria and around the Globe. “Evreiski vesti” represents the historical memory of the ever developing Jewish community in Bulgaria. The recent years are marked with the intensifying participation of the newspaper in the ongoing relation and connection between the Jewish community and Bulgarian society as a whole. The newspaper has maintained its strong stand against anti-Semitism, xenophobia and anti-Israeli sentiments not only in the country, but also internationally. The State of Israel has its eminent place on the pages of the newspaper, with the developments in Israeli society, the latest events from the Middle East and Israel’s struggle for peace receiving an in-depth coverage.

The newspaper received the Award for ethnical tolerance on the 11th annual media festival in Albena in 2005.
The 80th anniversary of “Evreiski vesti” was marked by honouring it with the 2013 Shofar award in the category of “Overall contribution for the development of the Jewish community in Bulgaria”.
The newspaper is issued bimonthly on 12-page editions, two of which being coloured.
It is distributed to subscribers and by direct sales from the Organization of Jews in Bulgaria “Shalom”.
Since 1999 the Editor-in-chief of “Evreiski vesti” has been Mrs. Mihaylina Pavlova. 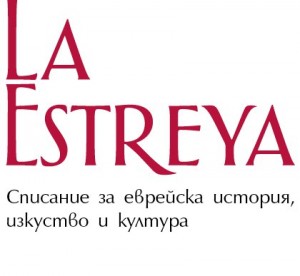 “La Estreya” magazine is a print edition of the Organization of the Jews in Bulgaria and has entered the media market in 2009. The editors and the publisher aim at increasing the popularity of the history, art and culture of Bulgarian Jews. To reach this objective, the edition gives opportunity for expression to authors and researchers from various fields.

The magazine publishes a series of materials, devoted to Judaism and many historical overviews of the life of Jews in Bulgarian lands during the centuries. The coexistence of Bulgarians and Jews receives its place and attention on the pages of the magazine, focusing also on the most eminent Jewish contributions to Bulgarian art and culture.

“La Estreya” is a documentary edition, trying to fill-out the common knowledge deficiency of the contemporary Bulgarian society regarding the Bulgarian Jews and their place in the social and cultural environment.
The magazine is a semiannual and can be purchased by bookstore “Bulgarian Scissors” or directly from OJB “Shalom”.

“Shalom” printing house, established in 1991, is an integral part of the Organization of the Jews in Bulgaria “Shalom”. The books it prints allow Bulgarian readers to get acquainted with various not only traditional, but also modern topics that give an insight into the life, the history, the soul and the traditions of Jews. “Shalom” printing house has made a name in offering professional, exquisite, and artistic works. The books, published by “Shalom” can be found here and can be purchased directly from the publisher, or from the book stores.

Together with the various activities, pursued by the organization, many texts on Jewish subjects have been created throughout the years. These texts, without much scientific scrutiny, are very useful to all academic or purely inquisitive individuals, seeking to learn more about the Jewish religion, tradition, festivals and customs. Our library has gathered and organized by topics these texts and we would be very happy if you find them interesting and helpful.