Opening of “Sport for Tolerance” initiative

The Minister of Youth and Sports, Krassen Kralev received the honorary sign of the Organization of the Jews in Bulgaria “Shalom” at the opening of the initiative “Sport for Tolerance” which started with the discussion “No to xenophobia, racism and hatred in sport”, organized with the financial support of the National Council on ethnic and integration аffairs at the Council of Ministers.

“You are the first Bulgarian state leader in the field of sport who helped the fight against xenophobia,” said the President of OJB “Shalom” Maxim Benvenisti at the presentation of the honorary sign.

The “Sport for Tolerance” initiative is held under the patronage of Sofia Mayor, Yordanka Fandakova and Minister Krassen Kralev while the Ministry of Youth and sports was symbolic host of the discussion. The opening of the discussion “No to xenophobia, racism and hatred in sport” was attended by Sofia Mayor Yordanka Fandakova, Minister of Youth and Sports Krasen Kralev, Secretary General of the Olympic Committee Belcho Goranov, Executive Director of the Bulgarian Olympic Commitee Borislav Popov, the Deputy head of Embassy of the State of Israel Iman Amasha, representatives of diplomatic missions of the United States and Greece, representatives of sports federations and organizations. Оrganizers of the “Sport for tolerance” initiative are OJB “Shalom”, the Commission for protection against discrimination, the “Ethnopalitra ‘Foundation, the Federation of the Zionists in Bulgaria and Club “Magen”. “Our efforts are aimed at developing mass sport, which not only ensures health for people, but also educates moral qualities. One of the most important is tolerance, ” said Sofia Mayor Yordanka Fandakova. 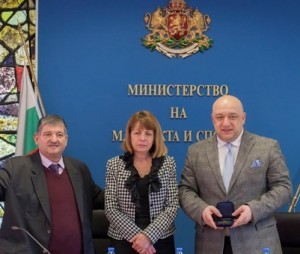 Mayor Fandakova said that “Sofia Municipality has a sustainable policy for support of sports and youth activities. Sofia Municipality supports initiatives such as the marathon Tole-Run, which was held for the second time last year. The same as “Famillathlon” and “Live actively” in which athletes and families, parents and children participate. Along with the choice of Sofia for European Capital of Sport in 2018 new opportunities for sport are being developed. Prevention against aggression, the core of which is the lack of tolerance, is a cause for me . Our society needs urgent action and agreement on these issues, particularly in the upbringing of children “, also said Fandakova. “Sport teaches qualities like patience, respect and perseverance, discipline and persistance are important part of it. Sofia municipality each year funds programs to promote sport among children and students, as well as for the construction of sports facilities. This year we open a new program to support sports clubs. We continue to invest in repairs and construction of gyms and sports halls of schools. We built 5 new sports halls and gyms, and this year we plan to build a new gym in school 98 in “Nadezda”municipality and an extension of the First English Language School and the French School with the construction of sports halls, “said Mayor Fandakova. Minister of Youth and Sports Krassen Kralev expressed gratitude for the award and shared with the audience: “In the last 25 years, pursuing success at any cost and medals we have forgotten that sport is one of the main mechanisms for the education of our children tolerance. That is why the task of the Ministry of Youth and Sports is to provide an opportunity for more children to play sports. We must pay more attention on the sport for all, not to focus only on the medals. ” during the discussion on xenophobia and hatred Minister Kralev stressed that ” through sport children and adolescents strengthen not only their health, but also learn to work with others, to be а part of a team . The Ministry of Youth and Sports develop and finance a variety of programs aimed at teaching children and students in different sports.”

The program of the discussion included: Presentation of the initiative “Sport for Tolerance” and “Sofia – European Capital of Sport 2018”; “The manifestations of xenophobia, racism and hatred in sport in Bulgaria and risks to national security – analysis, risks and prevention” – speaker Georgi Krastev – Advisor to the Cabinet of the Prime Minister – Secretary of the Security Council; Successful practices for preventing and countering xenophobia, racism and hatred in sport presented by the Bulgarian Football Union, Bulgarian Boxing Federation, Association of martial arts and the Swiss kickboxing and Muay Thai “Maccabi” organization; “Hate speech – public manifestations, criminality and prevention” – lecturer Mrs. Anna Dzhumalieva, President of the Commission for Protection against Discrimination and others.