Dr. Alexander Oscar is the new leader of the Organization of the Jews in Bulgaria “Shalom”

Home  >  For the media  >  Dr. Alexander Oscar is the new leader of the Organization of the Jews in Bulgaria “Shalom”
Share:

Тhe Organization of the Jews in Bulgaria “Shalom” held on April 17th this year in the Jewish community center in the capital its regular election conference. 103 delegates from across the country elected a new Board of Directors (Consistoire), Executive Board and Supervisory Board for the next 4 years. At the conference were presented and adopted reports on the activities of the Organization and of the Audit Committee for the past term of the management, as well as the strategy and the program for the future development of OJB “Shalom”.

After two highly successful terms as president, from office withdrew Dr. Maxim Benvenisti. With his rich administrative and organizational experience and firm position in defense of a just and democratic society, Dr. Benvenisti raised the prestige of the Bulgarian Jewish community at home and abroad and strengthened its policy of legitimacy and transparency. 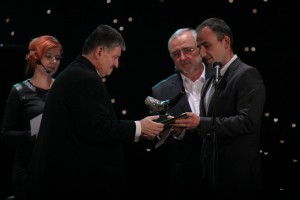 “Maxim Benvenisti is a leader who inspires those around him to improve and believe that if we unite around a good cause we can make the world a better place,” said Dr. Alexander Oscar, who was elected unanimously by the delegates as new Chairman of the Organization.

Neuro-ophthalmologist by profession, Dr. Alexander Oscar was for two terms president of the Sofia Jewish community, which is the largest Jewish community in the country. He is also President of the European Association of Jewish Community Centers and Deputy Chairman of The European Council of Jewish Communities. In his speech after the results were announced Alexander Oscar promised the newly elected leadership to build, maintain and stimulate energetic, caring and sustainable communitys and ensure continuity of values from generation to generation.