Commemorative ceremony in memory of the victims of the terror atack of July 18, 2012 on the airport of Sarafovo

Home  >  For the media  >  Commemorative ceremony in memory of the victims of the terror atack of July 18, 2012 on the airport of Sarafovo
Share:

On July 18, 2012 at 17:23 а bus with Israeli tourists who had just landed at the airport Sarafovo to spend their holidays on our seaside resorts, became the target of a terrorist attack. Five Israeli citizens were killed – Amir Menashe ז״ל, Elior Preis ז״ל, Itzhak Kolangi ז״ל, Kohava Shriki ז״ל, Maor Harush ז״ל and the bus driver – a Bulgarian citizen from Yakorouda- Mustafa Kyosov. 35 people were injured.

Four years later, on the same date to commemorate the dead and to lay wreaths at the memorial at the airport arrived relatives to the five killed Israeli tourists, the father of Mustafa Kyosov, representatives of the Jewish community in Bulgaria and Burgas, representatives of the municiplaty of Burgas and Yakorouda, ministers , MPs, diplomats and clerics from both countries and people sympathetic to the cause of peace, tolerance and understanding. 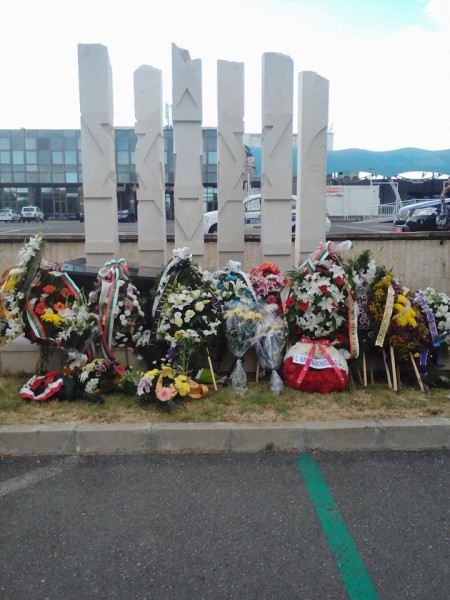 “4 years ago in Bulgaria the terror was seen as something foreign “- recalled Dr. Alexander Oscar, president of the Organization of Jews in Bulgaria “Shalom” in an address, read before attending the commemoration of Alberta Alkalay – a member of the Consistoire of OJB “Shalom” and president of the Center for Jewish-Bulgarian cooperation “Aleph”. “Today, things have radically changed our own perception of threats of global terrorism was overturned – wrote Dr. Oscar – More and more often and closer to Bulgaria are carried out attacks against the free democratic society taking hundreds of innocent victims, wreak panic and disturb the normal rhythm of life. Here and now we must make it clear that we will not succumb to fear, we insist that the guilty for the terror attack in Sarafovo will get fair verdicts and their connections to organized terrorist groups will be disclosed. “